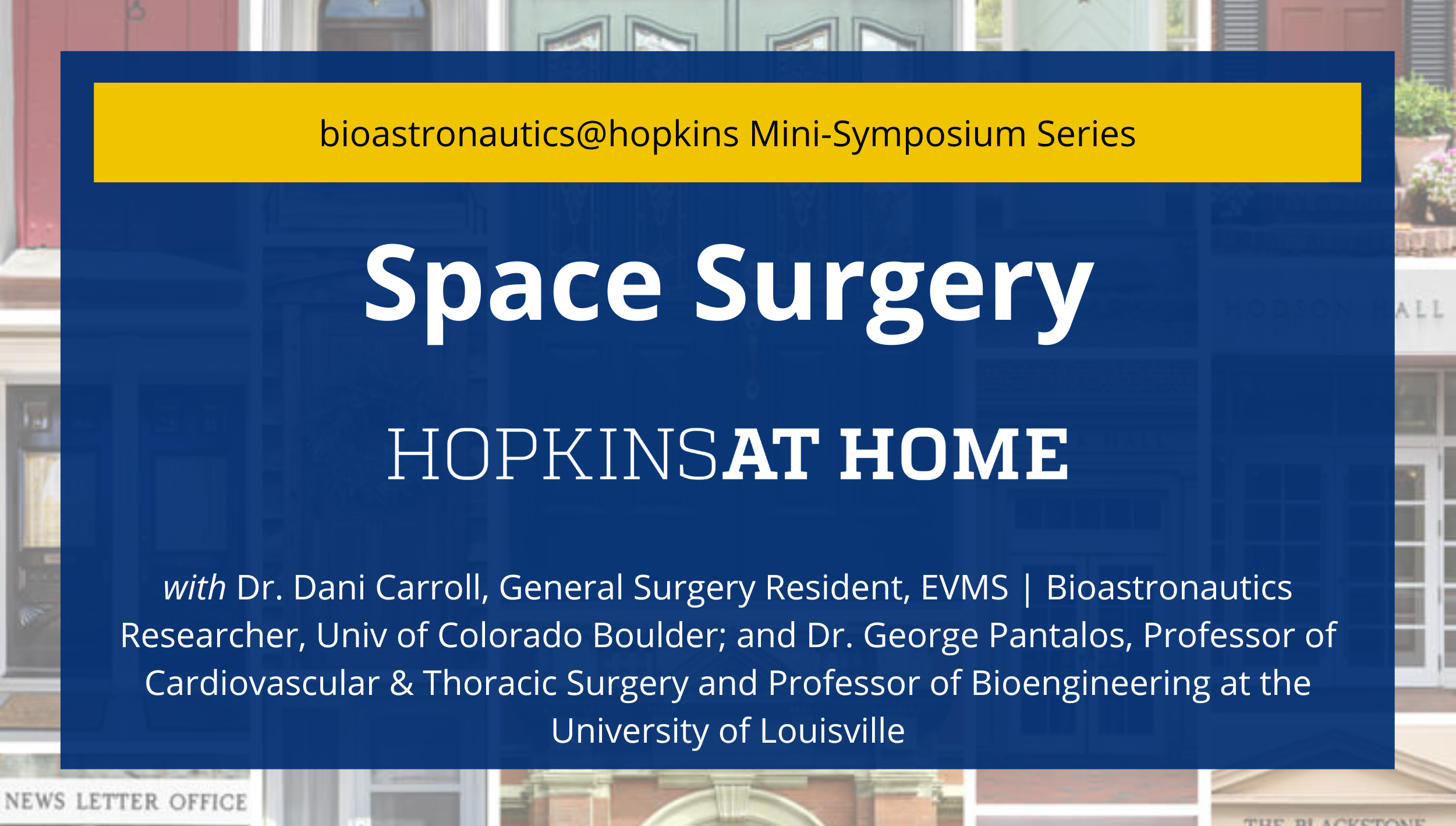 Please join us October 25, 2022 at 2 p.m. EST for the third in a series of mini-symposia presented by bioastronautics@hopkins, led by Dr. Mark Shelhamer. This session will feature speakers Dr. Dani Carroll, General Surgery Resident at Eastern Virginia Medical School; and Dr. George Pantalos, Professor of Cardiovascular & Thoracic Surgery and Professor of Bioengineering at the University of Louisville. This session will be moderated by Dr. Mallika Sarma. Dr. Sarma is a postdoctoral fellow in the Human Spaceflight Lab whose research encompasses human performance in extreme environments.

The topic for this session will be Space Surgery and will be approximately two hours long, with a keynote speaker, panel discussion, and audience interaction. We hope you will join us for this event, as well as similar events in the future, involving various topics related to human spaceflight. These events are hosted by the Commercial and Government Program Office of the Johns Hopkins University Whiting School of Engineering.

Dr. Mark Shelhamer started at Johns Hopkins as a postdoctoral fellow in 1990. He has bachelor’s and master’s degrees in electrical engineering from Drexel University and a doctoral degree in Biomedical Engineering from MIT. He has had support from NASA to study sensorimotor adaptation to space flight, amassing a fair amount of parabolic flight (“weightless”) experience in the process. He also serves as an advisor to the commercial spaceflight industry on the research potential of suborbital space flight. From 2013 to 2016 he was on leave from his academic position to serve as NASA’s Chief Scientist for human research at the Johnson Space Center.

Dr. Danielle (Dani) Carroll earned her B.A. in Bioethics and Italian at the University of Virginia. After college, she flew jets as a Captain on active duty in the U.S. Air Force, later transitioning to the Reserve to attend medical school back at UVa. Following 3 years of General Surgery residency at UC San Diego, she paused training to serve as NASA/TRISH Space Health Innovation Fellow and, later, as P.I. on a TRISH grant, and to complete dual master’s degrees in Bioastronautics and Engineering Management/Innovation at the University of Colorado Boulder. Now in her final years of surgical residency at Eastern Virginia Medical School, Dani continues to lead several collaborative Bioastronautics research teams, developing biomedical tech solutions that can preserve and optimize human health on upcoming exploration-class space missions. She is also the immediate past president of the Space Surgery Association and currently serves on the Board of Directors for the University of Virginia Medical Alumni Association. In her free time, Dani enjoys flying, diving, cooking, and trail running with her rescue pup, Rosie

Dr. George Pantalos has been a cardiovascular explorer for over 45 years. He has been a Professor of Cardiovascular & Thoracic Surgery and a Professor of Bioengineering at the University of Louisville, in partnership with Jewish Hospital and Norton Children’s Hospital, since July 2000, after holding similar appointments at the University of Utah for 17 years. George has also collaborated with NASA for many years helping to understand cardiovascular adaptation to the weightlessness of space flight and the return to Earth. George has flown 58 parabolic flight missions to date. George as flown 43 research missions on the NASA parabolic flight aircraft and led the development of a cardiovascular diastolic function experiment – that included an instrumented artificial heart beating on a circulation simulator – that flew twice on the Space Shuttle Discovery.  Other reduced gravity research projects have included delivery of effective chest compressions for CPR in 0-G, organ perfusion in 0-G, and the development of surgical capabilities for exploration space missions.